How you change the world by buying ‘I was a Sari’

How you change the world by buying ‘I was a Sari’

Shopping from us in 2021, rather than other brands, has

Most companies measure success by their sales. These are important, but we also value how much we can lower waste and transform the lives of the people we employ.

Since 2016 we have stopped more than 1 million square meters of saris, the main dress of Indian women, be turned into waste. That’s the equivalent of 800 Olympic sized swimming pools.

We believe saris are way too beautiful to become waste, and so give them a second life – turning them into clothing and accessories instead. So they become part of your lives.

We gave them second chances, by giving them their first jobs.

MEASURING THE IMPACT OF SECOND CHANCES

We measure how many of our artisans can look their managers in the eye.

Because they have new purpose.

When our artisans join us, they typically hold their head and eyes low, reflecting their low self confidence. They’re shy and can’t look us in the eye.  They haven’t necessarily had the best start in life and have often felt that they’re not capable of much. As they work for us we see how they change.

As we work together we hear from our artisans that

am saving up for my child’s education

have a skill that I get paid for

“It feels so different having a regular paycheck and a new skill. Being part of a team, building something.”

Some of our artisans went on a plane for the first time, to Rome where we worked with Gucci designers to reimagine the Indian sari. We went up on stage at a prestigious Sustainable Fashion awards ceremony in Milan to collect a global prize for their work.

Another project with Gucci Equilibrium meant our artisans learnt embroidery techniques – a craft that is usually just for men in India. So they smashed through that ceiling too.

This year’s International Women’s Day was about gender equality and the environment.
The theme was breaking the biases people have, which stops women from reaching their potential. Reducing the blocks, that just get in the way.

About the Author: I was a Sari 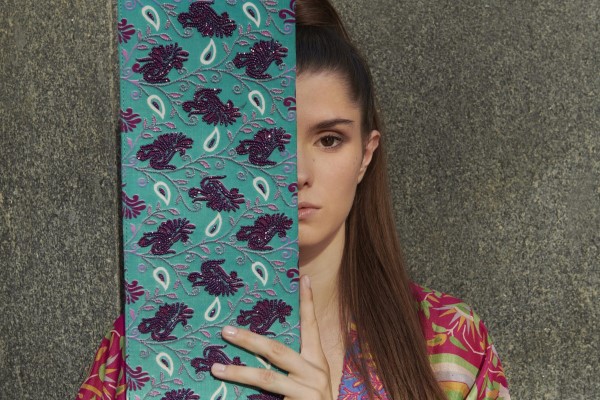 Support our movement and get the low down